The Problem with RACI 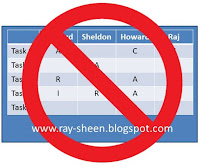 While the Project Management Body of Knowledge (PMBOK Guide®) may refer to it as a Responsibility Accountability Matrix, everyone I know calls it a RACI Matrix. It is supposed to clarify roles and responsibilities, yet it often creates more confusion that it clarifies.  So let’s look at this tool, the benefits and the pitfalls that create the problems.

Assigning responsibility for work is an age-old principle.  Even in early civilization, some people were designated to have certain responsibilities. The ancient kings had cupbearer, chariot drivers, shield-bearers, and ministers of all types.  These individuals had specific responsibilities and if they didn’t perform the punishment was often sharp and swift.  In more modern times, thanks to Fredrick Winslow Taylor and scientific management theory, everyone in business has a designated role or position and they are expected to become expert at the responsibilities associated with that role.

But projects are a little different.  They don’t always lend themselves to scientific management principles. Projects are temporary endeavours undertaken to create a unique result.  Individuals on the project team are temporarily assigned to work on project activities, and some of those activities may not be well defined.  Because of the unique nature of projects, a pattern may not already exist.  Roles, responsibilities, authority, and accountability need to be assigned to prevent duplication or work or missing work.  Which brings us to the RACI matrix.

The RACI matrix is the most common tool for assigning roles and responsibility to project team members.  The matrix is structured by placing the project tasks on one side of the matrix, normally the vertical axis; and the project team members on the other side of the matrix, normally the horizontal axis.  The role of each individual with respect to each task is then noted in the matrix as either R – Responsible, A – Accountable, C – Consulted, I –Informed, or left blank if the individual has no role.

The RACI matrix assigns a role to each individual, but it does not clarify what they are supposed to do.  And that is what leads to the confusion.  Who plans the task – the “Accountable” person or the “Responsible” person?  I have seen it explained both ways.  Does the “Consulted” person only participate when asked, or are they expected to engage and ensure their perspective is included?  Again I have heard it described both ways.  And then there is the question, “How can someone be accountable but not responsible, or responsible but not accountable?”

Questions like these and others have led to a plethora of variations on the RACI matrix.  The fact that there are so many variations is an indication that there is a major flaw with the RACI approach.  If it was working well, people wouldn’t be trying so hard to improve it.   Let me list a few of the alternate approaches.

There are probably more, these are just the ones that I am aware of.

So what is the fundamental problem with RACI?  I believe it is that while defining roles, it does not clarify actions.  But clear actions are what a project needs.  As a retrospective tool to look back on a situation, RACI is effective.  It can determine who was responsible for success or failure?  Who was accountable for ensuring the task was completed?  Who was consulted along the way and how effective was their input?  And who was or was not informed and what impact did that have on the project?  Great questions when doing a post-mortem on a project; but not very helpful for proactive project management.

When planning and executing a project, the project team members need to know who is doing what.  A matrix focused on actions associated with each task is much more beneficial to the team.  Who is planning the work?  Who will be helping on the task?  Who are the stakeholders that have to approve or sign off on the results of the task?  With these answers, the project leader and project team can manage their resources, coordinate the schedule, and ensure that risk mitigation plans are being executed in a proactive manner.  They don’t have to wait for success or failure and they try to understand what happened.

For that reason, I recommend the use of either the DACI or CLAM approach.  These are activity-based matrices.  I have found that the level of confusion concerning who is doing what is significantly reduced when these are used in project planning and execution.
Posted by Ray Sheen at 1:06 PM