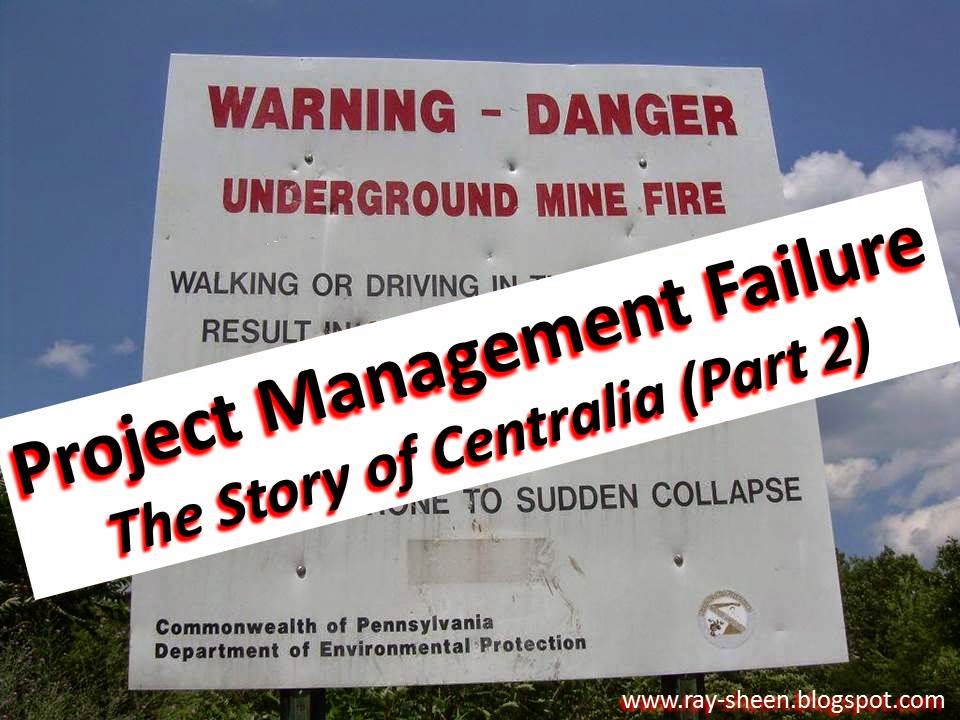 The mine fire in Centralia, Pennsylvania, USA, had been burning for nearly two months.  In my previous blog post I covered the actions and project management failures on the part of the city.  After several months of fighting the fire, the city council has given up and turned the responsibility for fighting the fire over to the state Department of Mines and Mineral Industries (DMMI).  Let's consider how they approached this problem.

Failure #1 - Unwilling To Think Outside The Box

By the time the state DMMI got involved, there was smoke and steam coming from fissures in the ground.  In early August, 1962, the DMMI held a meeting in Centralia.  At the meeting a small mining company offered to dig out the fire for free if they could then have the rights to any coal that they dug out at the same time.  The offer was rejected because that approach did not go through the normal state procurement processes.  First project management failure by the state – unwilling to consider innovate responses to unique project problems.

Another month passed and now the state hired a company to excavate the burning portion of the mine for $20,000. (Yes, they did follow the normal procurement process this time.)  But this contractor was not allowed to test to see where the fire had moved, but was required to dig the area that was specified in the contract.  Unfortunately the contract did not correctly guess the direction and speed of the fire.  Further, the contractor was only allowed to work one shift a day and was not allowed to work on weekends or holidays.  Unfortunately, the fire did not stop burning at night or on weekends and holidays, so it grew to a size much larger than what was in the contract.  Next project management failure – a rigid focus on the scope document ignores the goal of the project.

By November, five months after the fire started, a new plan was initiated.  DMMI decided that the abandoned underground mines around the fire would be pumped full of crushed rock and water to isolate the fire.  This effort would cost an additional $40,000.  But there were several problems. There was no local source of sufficient water to do the work, so it had to be pumped in.  It was now winter; and winter in the Pennsylvania mountains can get cold.  The water lines and equipment for creating the crushed rock slurry froze so the pumping was delayed and sometimes curtailed.  Meanwhile, bore holes for locating the edge of the fire were actually creating paths to let the fire move into new areas. This part of the project finally finished in March of 1963.  By the middle of April it was clear that the fire was raging beyond the enclosing circle of crushed rock.  Next project management failure – poor planning of a rebaseline over-looked obvious constraints and risks.

The next proposal considered by DMMI to put the fire out was a three-pronged effort that could cost over $500,000 if all three prongs were followed.  That would have to wait until the state’s new fiscal year started on July 1.  The fire had now been burning for over 13 months.  Unfortunately, the DMMI budget was cut in the new fiscal year, so this project was not funded.  Next project management failure – inability of the team to explain the project impacts (threat or opportunity) to management, leading to a short-sighted decision.

The DMMI did eventually allocate $40,000 for fighting the fire and in July of 1963 another small project similar to the first one the DMMI funded was undertaken with the same results.  The state now ignored the fire and it continued to burn until the federal government finally decided to step in.


The State Tries And Fails

In the first blog in this series I looked at the failures on the part of the city.  This time we considered the state agency. In my last blog I will talk about the response of the federal government.  But let’s review the project management failures by the DMMI: