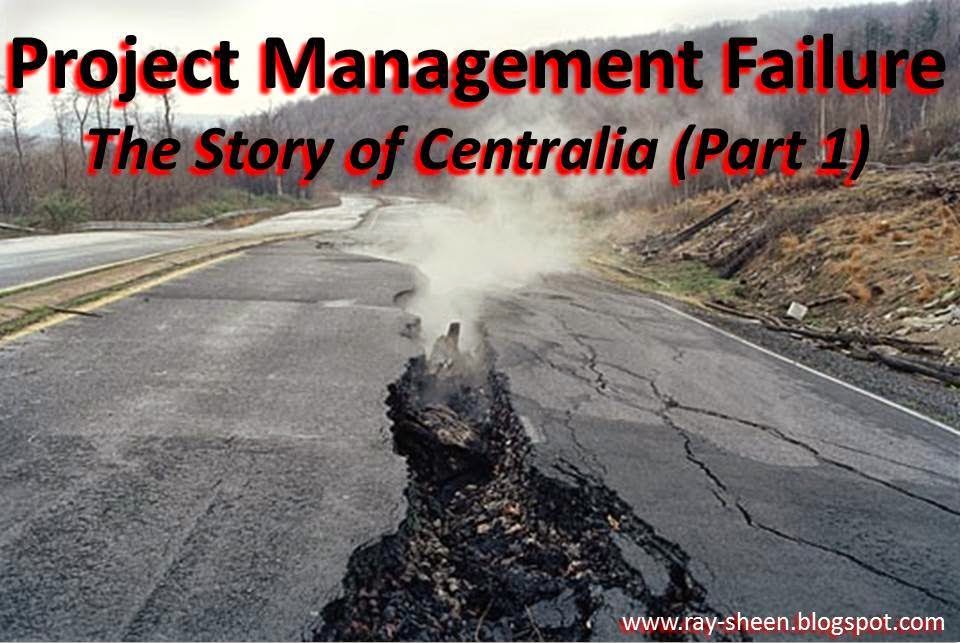 Let me tell you a story of a tragedy; an avoidable tragedy.  It is a case study in what not to do when managing a project with a problem.   It is the story of the mine fire in Centralia, Pennsylvania, USA.  The fire was intentionally started by the city on May 27, 1962.  It is still burning over 50 years later, and it is expected to burn for another 250 years.  It has grown so large that it can’t be extinguished.  It has made the town of Centralia and the neighbouring town of Byrnesville virtually uninhabitable.  The population of Centralia has dropped from over 2700 in 1980 to just 7 in 2013.  The fire now encompasses an area of 3700 acres, is 300 feet deep, and it is still growing.

According to most accounts, the fire was intentionally started on May 27, 1962 as part of a town clean up to prepare for the upcoming Memorial Day celebrations.  The new town landfill, which had only been open for a few months, was next to the cemetery where the memorial service would be held.  It was both ugly and smelled bad.  It was common practice in the town to “clean up” a landfill by heaping the combustibles and burning them. So, under the direction of the town council, the fire department did a controlled burn at the landfill that day.

Failure #1 - Not Understanding The Project Environment

This landfill was in an old strip mine that was above abandoned underground anthracite coal mines.  In fact the whole area around Centralia is honeycombed with these underground mines that had been in operation for over 100 years.  The strip mine was a surface mine.  According to state regulations, for it to be used as a landfill, any openings into the underground mine would need to be closed and sealed with non-combustible materials.  The city had sealed five holes and received a permit to operate the landfill.  Project management failure number one – not recognizing a high risk environment and taking that into consideration in the project plan.  The large number of holes indicated that the area around and under the strip mine was porous.  It was high risk area for breakthroughs into the underground mines.  Filling the strip mine with rubbish could easily destabilize some of the underground chambers leading to a collapse and more openings.

The fire department regularly set and monitored landfill fires at landfill sites around the community.  Although this was the first fire at this site, there was nothing else unusual about May 27, 1962.   But the fact that it was a brand new site meant that there were unknowns associated with doing a controlled burn.  The rubbish was piled, the fire set, it burned for several hours and then the fire department hosed it down to put the fire out. Project management failure number two – when doing something for the first time, double check the results to be sure they are what you expected.  The fire department should have provided extra monitoring for this fire since it was the first fire at this site.  They didn’t.

Finally the city became concerned that there might be a problem. The fire had been burning for nearly three weeks.   They hired a contractor with heavy earth-moving equipment to essentially turn over the rubbish in the landfill and allow the fire department to hose down the inner core of the landfill.  As the rubbish was turned over, flames were everywhere, and that is when the firemen discovered another hole from the strip mine into the underground coal mines; a hole that was almost 5 meters long and nearly a meter wide.

The city notified the State officials, but their initial response was slow and they didn’t send anyone to investigate until July 19.  In the meantime, the city contacted a contractor who had handled mine fires in the past.  He came to Centralia and investigated the situation.  He said he could dig out the problem and stop the fire for $175.  But the city council said a project like that would need “to go through channels” which could take months.  Next project management failure – being so tight with resources that even small issues cannot be resolved.

The City Tries And Fails