Innovation: When The Competition Gives You An Opening 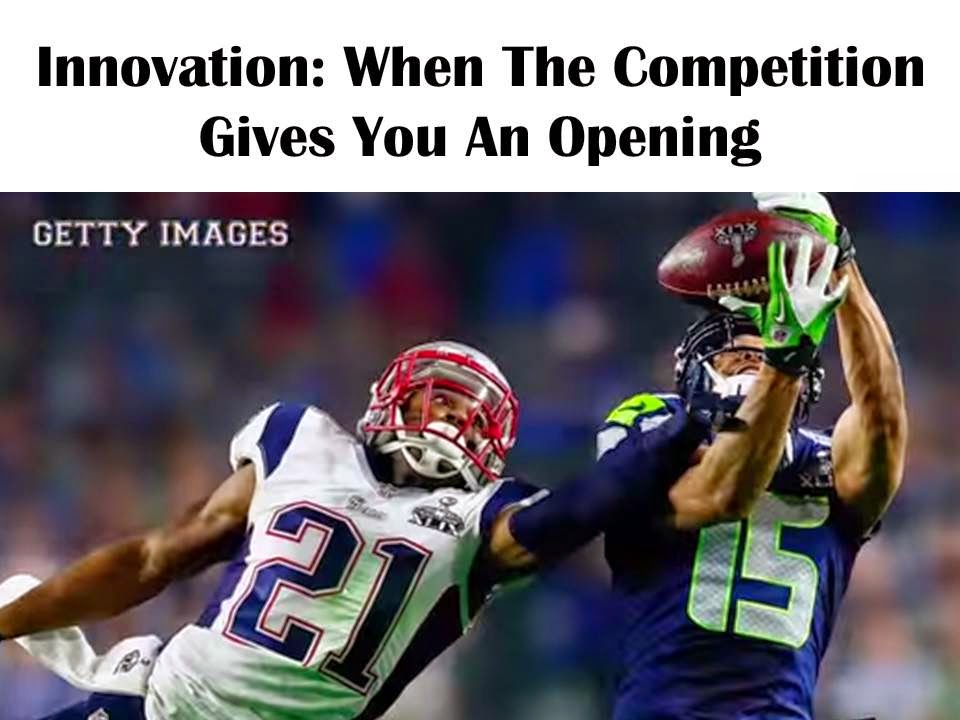 I was recently watching the Super Bowl and was reminded about the value of competitive awareness, empowerment of your staff, and taking decisive action when implementing a product line strategy.  Sometimes the best opportunities are not because of something we have done, but rather because of an opening that our competitors have created.  If we quickly recognize the opportunity and take action, we can gain a tremendous advantage.

Super Bowl XLIX was between Seattle and New England.  Let me recap what happened.  The game had been a back and forth affair.  At different times each team was leading.  Near the end of the game, New England was slightly ahead, but Seattle had the ball and was driving toward a possible winning touchdown.  The Seattle drive had been a combination of good play calling, good execution, and good luck – a tipped ball literally fell into a Seattle player’s lap at one point for a big gain.

Seattle had the ball first and goal from the five yard line with less than a minute to play.  Seattle had one of the best power running backs in the league who was having a good game.  They also had a mismatch on the field – New England was in its “goal line defense” and Seattle had a spread offense.  That meant there were Seattle receivers who would not be well covered.  Therefore Seattle had two great options; use the running back or throw a short slant pass.  Both had been successful for them on numerous occasions.

Many of the sports pundits and reporters have focused on Seattle and their play calling.  But I want to focus on New England and their cornerback.  That is where we find the product line strategy lessons.

Therefore you need to be regularly gathering competitive intelligence and learning what your competitor is doing.  Search for the patterns in how they operate.  These patterns can create openings for you to exploit.  I am not saying that you should always be reactive.  You should have your own strategy that you are implementing.  But in addition, you should be taking advantage of the opportunities that the competition may offer.

This brings us to the second lesson.  The people on the front line need to have the knowledge, confidence, ability, and authority to take action.  When creating a product line strategy, it is often well understood in the executive suite, but not by the people on the phone, on the floor, or on the road who are implementing it.

In today’s business environment, people are highly connected.  Customers want and expect immediate answers and information.  That means that our front-line customer-facing staff must be knowledgeable and able to act to provide that information and support to customers. Based upon the competitive strategy and upon the actions of the competitors in the market, our staff needs to know what to do and how to do it.  This will require more than sending a memo out on Friday afternoon.  It requires training and practice.

Let’s look at the New England cornerback.  He was a rookie (first year in the league), a backup player (seldom on the field), from a small college (no “big-time” experience).  He was probably the least experienced member of the team when it came to playing football at a premier level under a media spotlight.  But he had studied the Seattle offense.  He had practiced what to do in that situation.  As he has said, when that play started he knew immediately what was going to happen and what he would need to do to stop it.

Our final lesson is that when the decision is made, we must act.  In most industries today, the pace of business is very fast.  If a potential customer cannot find or get what they want from one seller, they are immediately on to the next one.  While a competitor may open up an opportunity in the market as they implement their strategy; that opportunity can close again very quickly.  Instantaneous information, overnight delivery, and mass customization create a business environment where an action delayed is an opportunity lost.

The front-line customer-facing staff need the confidence and authority to do what is both right for the customer and consistent with the strategy.  When they see an opportunity created by a mistake or oversight of the competition, they need to act, rather than submitting a request to senior management that gets discussed at the next quarterly strategy review meeting.

Let’s look at the New England cornerback again.  He recognized the play and knew where the ball would be thrown.  So he did what he had to do to get there and catch the ball.  It is instructive to see the picture of the catch.  The New England player is focused on catching the ball.  The intended Seattle receiver is falling backward, out of position and out of control.  It is clear who had taken decisive action and who hadn’t.