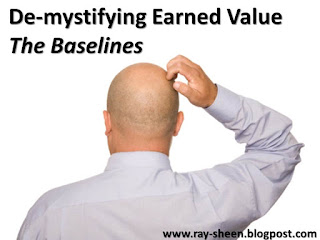 In many cases, tell a project manager they must use earned value analysis on a project and you will hear a groan.  Earned Value Management has been tainted with an aura of overwhelming bureaucracy and incomprehensible numbers and ratios.  While some organizations may have done their best to confuse and confound project managers and project teams with Earned Value Management – it is really a very basic and easy to use set of project analytics.  This blog post will explain the earned value baselines and future blog posts will discuss variance analysis, project forecasting, and the role of the cost account manager.  Or you can get everything in one document by ordering the ebook at the end of this post.

Earned value management is an analytical approach for determining the current cost and schedule status of a project and for forecasting the final cost of a project.  It combines scope, schedule and resource management into one set of measurements.  When used properly it will simplify and reduce the effort needed to provide effective project management control.

The PV is created using the Work Breakdown Structure (WBS), the project schedule, and the task estimates.  Every task in the WBS is assigned a separate account number in the financial system.  The cost estimate for every WBS task is then spread over the time periods (normally months) associated with the project schedule for that WBS task.  Those cost amounts are placed in the WBS account for the appropriate periods to create a time-phased task-level budget estimate.  This is the task PV.  Once all of the task PVs are complete, they can be summed into a project PV.

When spreading the task estimate across multiple time periods, one of two techniques is used.  The cost can be “level loaded.”  This means the costs are spread evenly across the time periods in which the task is scheduled to be accomplished.  The other approach to spreading the cost is “event loaded.”  In this case, the WBS task is planned at a micro-level (daily or weekly) and the cost associated with the work for each micro-time period is assigned to that period and then summed to the time periods used in the financial system (normally monthly).

PV is expressed either as “Current PV” which is the PV that is planned for a particular month, or “Cumulative PV” which is the PV from the beginning of the project to the point in time under consideration (normally the current date). The final value of PV – that is the total PV for the project – is the Budget at Completion (BAC).

Earned Value (EV) is a judgement call by the project manager and the project team concerning how much of a task has been completed.  The total possible earned value for a task is based upon the original budget estimate for that task, which is the task Planned Value (PV).  The percentage of a task that is completed is the percentage of value that has been “earned.”  If a task is 50% complete, the task has “earned” 50% of the planned value – regardless of the cost required to get to that point.  Before a task is started, its EV is 0 since none of the planned value has been earned yet.  When a task is complete, it has “earned” all of the value for that task, so the EV = PV.  EV for a task can never exceed the PV for a task, regardless of how much has been spent.  Nor can EV ever be negative.
A risk with earned value is that someone will claim that much of the value for a task has been earned, when in reality very little progress has been made.   To avoid this problem, many organizations adopt rules or practices for how earned value is to be credited.  This list is the most commonly used ones in my experience


With these three project perspectives, PV, EV, and AC, the project manager can determine the underlying causes of cost and schedule variances and forecast project completion.  These topics will be discussed in future blog posts.  If you would like to find out even more about earned value management, purchase this ebook. 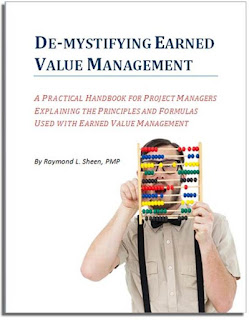