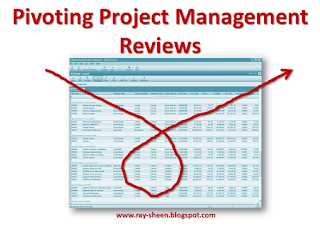 Entrepreneurs are using the terms “pivot” and “persevere” to identify strategies for decision-making.  When confronted with a situation that is not leading to the desired results, they must decide whether to gut it out and persevere on the current path, or pivot to a new direction and new approach.
This decisions process can and should apply to many of our business and project management practices.  If your practices are not leading to the desired results, make a conscious decision to pivot or persevere.

Let me describe the typical project management review I see when I first visit a new client.  Senior management is reviewing project status on a regular basis – normally tied to the calendar.  For example, one client had a weekly review a summary of all open projects and a “deep dive” on two or three projects based upon which projects were perceived to be in the most trouble.  At the deep dive portion of the reviews, the emphasis was upon the status of the problems or issues that had occurred and what the team was doing about those issues.  The project team received lots of “help” to fix the current problem, but there was seldom any discussion about extrapolating from the current issue to foresee future issues or to share lessons learned from this situation with other project teams so that they could avoid the same problems.

My recommendation for a project management review pivot is to change from this backwards-looking, reactive project management reviews to a forward-looking preventive project review.  What do I mean?  The project review should be focused upon all the open and remaining risk threats on the project (not just the current crisis) and the resources and management actions needed to reduce or eliminate those threats.  And when you get that working well, add a discussion about the possible risk opportunities for the remainder of the project and the resources and management actions that will enable those opportunities to be realized.

The current approach leads to a “superman” mentality among project leaders.  They bounce from crisis to crisis, using their superpowers to overcome each one.  They don’t prevent problems, they just solve them.  The leaders get great credit and often rewards for their effort.  In fact they often take on “rock star” status within the organization.  While they may be good fire-fighters, I would not call them good project managers.

Let me relate a story from a client of mine.  His high-tech firm had two major development projects underway.  Both were developing new product lines using emerging technology.  Both projects were large be this company’s standards – they were planned for three to four years in duration, with a budget of over $20 million, and a large team located in multiple sites.  Both projects were managed by senior project leaders with strong technical, business and inter-personal skills.

One project leader, we will call him Jack, was a fire-fighter.  His team faced many problems and challenges and he overcame all of them.  Granted it took late nights, weekends, and some creative solutions but with his charismatic personality he rallied the team and they come through. The project was a major market success.  However, the project finished more than a year late and several million dollars overrun.

The other project leader, we will call him Dave, was a risk manager.  Dave emphasized proactive risk management.  He had a well-developed plan with risk triggers and options that were used by the team.  His project did have several minor fires that had to be resolved, but nothing like the problems that occurred on Jack’s project.   Dave also had a major market success.  But Dave’s project was only two months late and came in on budget.

So now it is six months later and the business is going through a major restructuring due to some problems in a different division.  The business is downsizing and it only needs one senior project leader.  So Dave was laid off.  I asked the senior management why they laid off Dave instead of Jack.  Their response surprised me.  In their opinion, Jack was a superhero who could fix any problem, but they didn’t know if Dave could handle the stress of a major project in crisis.

I pulled together a summary of the two projects, including the major challenges that each had to overcome.  I identified the proactive risk approaches that Dave had used and the absence of those in Jack’s project.  Several of the senior managers told me they had never stopped to consider the risk management approach in the project reviews.  They never asked about risk avoidance and mitigation. They were just focused on the current crisis and what was being done to fix it.

So if you want to transform your project performance, I encourage you to consider pivoting your project management review approach.  When reviewing a project, I recommend the following topics.