PI - An Inspiration For Innovation 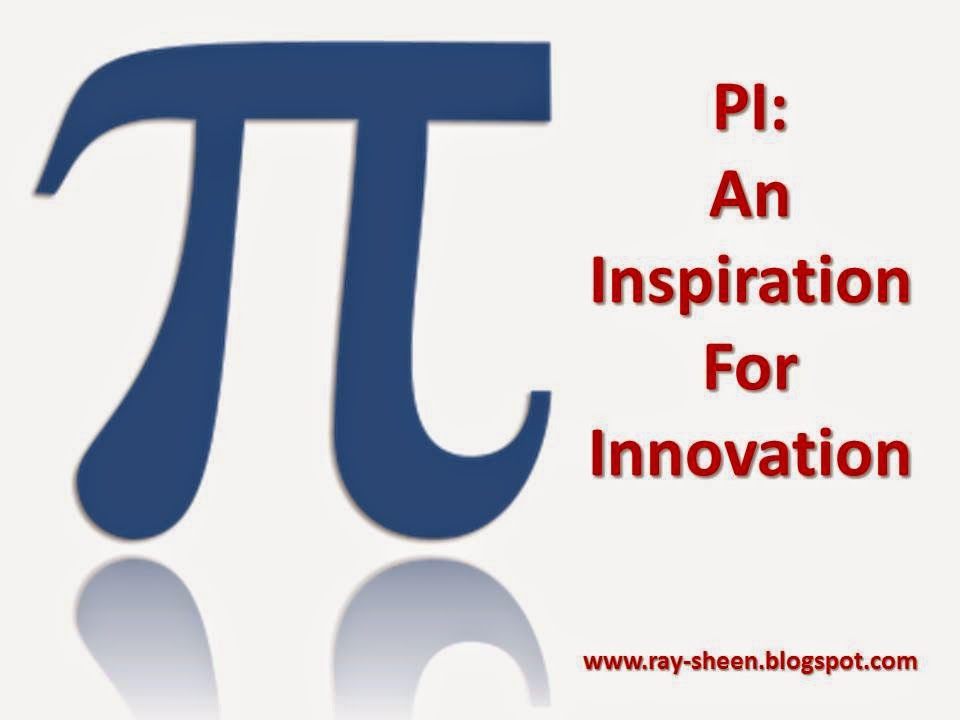 Well if you remember back to your middle school geometry class you learned that the ratio of the circumference of a circle over the diameter always equalled the value for π, 3.1415926….  And unless you are an engineer or scientist, you probably never used that useful piece of information on anything since you took the SAT exam.  This past Saturday was PI-Day because the date represented the first five digits of PI, 3/14/15, and at 9:26 am we had eight digits of pi.

By now you are probably thinking I was the inspiration for the Big Bang Theory TV show.   But I really do find that pi is an inspirational number for innovators.  Not the actual value of pi but the concept of certainty and infinity mixed together.  The ratio of the circumference divided by the diameter for every circle is always pi.  It doesn’t matter how big or small the circle.  It doesn’t matter what part of the world you are in.  It doesn’t matter what the circle is enclosing or representing.  The value is always the same.  And yet the value is infinite.  There are endless possibilities for the value of pi.   How can that be?

Pi is an irrational number.  It cannot be represented with a finite number of digits or a common fraction.  The digits to the right of the decimal point have no repeatable pattern.  The precise value of pi is only limited by how far you want to go with your division.  I went out to the first eight digits and sent a tweet.  There is a website that has the first one million digits to pi – and there are still more digits after that.

So why is pi an inspiration for innovation?  It reminds me that innovation can occur even in the standard everyday things that are part of our life.  The ratio for the circumference over the diameter is always the same but the actual number can change by just looking past what you have right now.

Let’s take an example.  For thousands of years people moved stuff around on land in carts drawn by horses and oxen.  Then came the innovation of steam and soon there were locomotives pulling carloads of stuff across country.  Numerous smaller innovations happened with locomotives and rail cars to improve their capacity, speed, and reliability while lowering costs.  But this innovation required rails to be laid in order to get stuff where you wanted it to go.  Something else was needed and a new innovation using an internal combustion engine with the cart became another method for moving stuff was available, the car and truck.  Again multiple innovations have continued to improve speed, capacity, and reliability while lowering costs.  Of course we also have the innovation of powered flight which moves stuff even faster across long distances.  And who knows what the next innovation may be.  The basic function is unchanged – move stuff from one location to another, but innovation has been constantly changing and improving how that is done.

That is just one field.  There is also tremendous innovation that has occurred over the centuries in agriculture, medicine, household appliances, and the list can go on and on.  The function that is served by the innovative product is the same as earlier products, but the innovation finds a better way to do that function.  Just like the ratio of the circumference over the diameter stays the same for every circle, but the precise value for pi can be continually refined and improved.

So when you want to noodle about a new innovation, you don’t have to start reading science fiction and imagine what life would be like in a galaxy far, far away. Just take a current, everyday activity or function and try to find the next best way to do that.  Assume that for everything we do in life, there are an infinite number of ways to do it.  Just go to the next one and see if it can make life a little easier, faster, cheaper, or more fun.

It is like finding the next digit to the answer for the value of pi.